In Uttar Pradesh, on both sides of the Yamuna River, sits Brij Bhoomi, the place where Lord Krishna was born. The cities of Mathura and Vrindavan lie in the heart of Brij Bhoomi. These sacred cities echo the eternal name of Lord Krishna. Many locals claim that the music of his flute can still be heard in every alleyway and fallen leaf. The serenity of these holy cities can be experienced with our Mathura Vrindavan Darshan Packages.

Vrindavan is known as the "city of temples" and Mathura is a revered cultural site. Particularly throughout the festival celebrations, it draws 500,000 pilgrims annually. The Mathura Vrindavan tour attracts many visitors from around the world who want to experience wonderful traditions, rich legacy, and North Indian culture.

Although Mathura and Vrindavan have a lot to offer for every traveler, including exquisite food, pastoral beauty, and historical legends, the religious will find the devout atmosphere of the riverfront cities to be sufficient motivation. Mathura Vrindavan Darshan Packages by Holidays DNA provides you the opportunity to witness the best aspects of these towns as per your preference.

Our Mathura Vrindavan Darshan Packages provide you with details of the sightseeing places and even local cab vendors for easy commute. You can even book the package and customize it. A stay in a best-in-class hotel within your budget and a tour of the nearby cities can also be arranged on demand.

Some of the best places to include in Mathura Vrindavan Darshan Packages are:

The Shri Krishna Janmasthan Temple is situated in the holy city of Mathura. It is constructed around the cell in which Lord Krishna's parents, Mata Devaki and Vasudeva, were held captive by his evil uncle Kansa. Since Lord Krishna is thought to have been born there, the temple has immense religious significance for Hindus.

Within the Krishna Janmasthan Temple Complex, there are many temples devoted to the deity. When one enters the temple, the heavenly ambiance and purity gives one a strong sense of certainty that this is where Lord Krishna truly presented himself. Festivals like Janmashtami, Basant Panchami, Holi, and Deepavali are celebrated with great fervor. 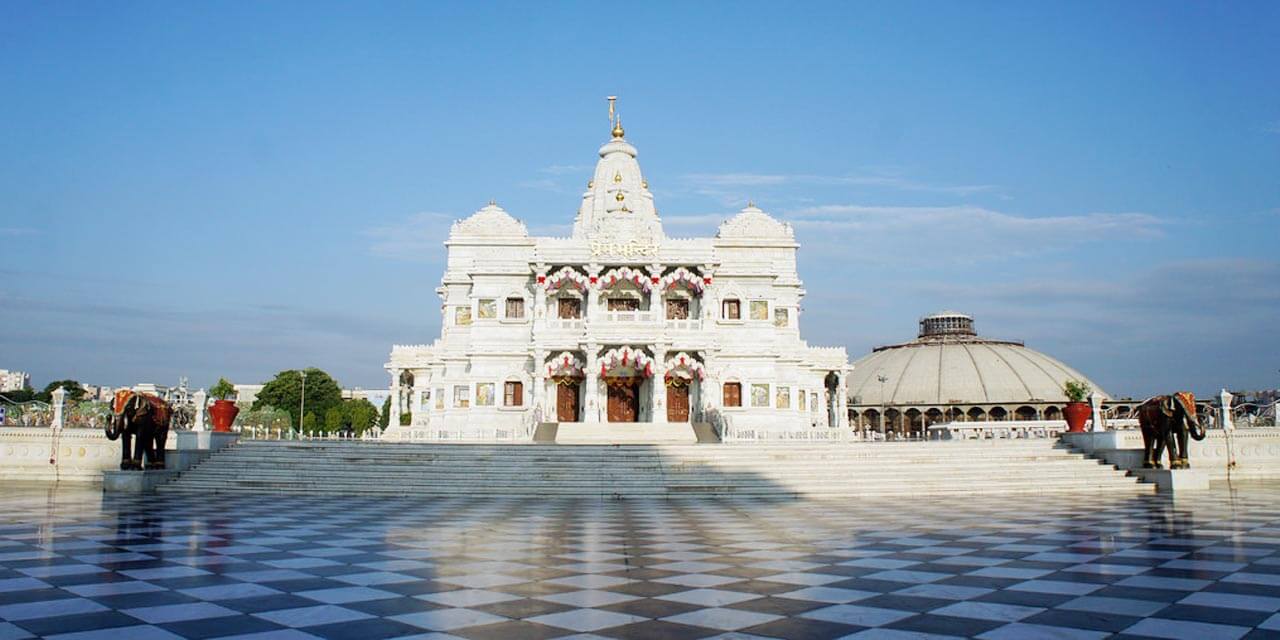 The Prem Mandir, a sizable temple imbued with elegance and grandeur, was created by Jagadguru Shri Kripaluji Maharaj in 2001. A magnificent holy site, it is also known as the "Temple of God's Love". Devoted to Radha Krishna and Sita Ram, it is a recently built temple renowned for its piety and tranquility. It is the most stunning location in the entire Brij region.

You must witness the exquisite architectural design constructed in white marble. The main temple is covered in paintings representing significant events in Lord Krishna’s life. The temple's illumination enhances its magnificent appearance, especially at night. An audio-visual treat, the colorful water swirls and turns to the sounds of Radha Krishna kirtans.

Located in the holy city of Vrindavan, a Hindu temple called Shri Banke Bihari Mandir honors Lord Krishna. This temple, one of the most renowned in the nation, is one of the seven temples of the Thakur of Vrindavan.

The temple is known for its magnificent Rajasthani-style building, complete with arched windows and careful stonework. Calm chants of "Radha Naam" are used to invoke the divine. The Banke Bihari Temple, one of the holiest locations for worshiping Lord Krishna, is crowded with devotees throughout the year. 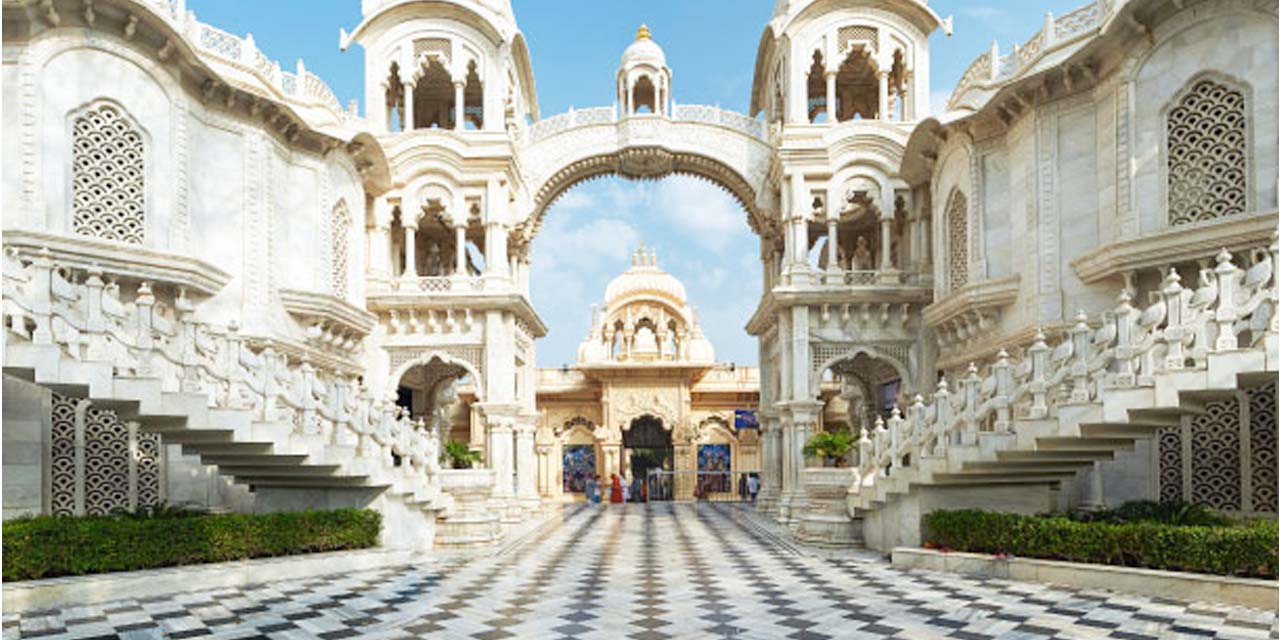 ISKCON Vrindavan, also known as Sri Sri Krishna Balaram Mandir, is the realization of Swami Prabhupada's goal to construct a temple for the divine brothers. The temple dedicated to Lord Krishna and Lord Balaram has been constructed in the same sacred city where they once played together.

ISKCON Temple is a major attraction in the city of Vrindavan and is frequented by devotees. It is situated in the Raman Reti neighborhood. The daily Aarti and Bhagavad Geeta courses offered here leave devotees in awe.

The three altars in ISKCON Vrindavan are where Sri Gaura Nitai, Shri Krishna and Balaram, and Sri Sri Radha Syamasundara, as well as Lalita and Vishakha, sit. However, Lord Krishna-Balaram is the temple's presiding deity. The Krishna-Balaram Mandir practices wonderful deity adoration in the whole world. 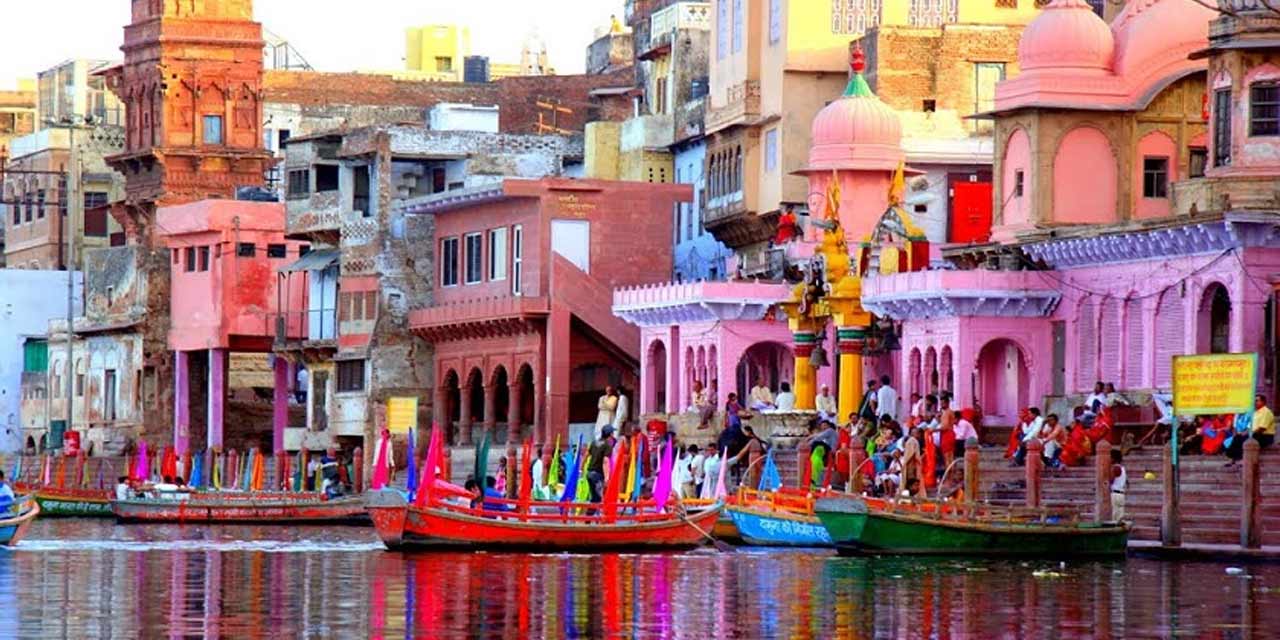 On the banks of the Yamuna River is the respected and holy bathing ghat known as Vishram. It serves as the focal point for 25 more ghats in addition to being Mathura's major ghat. Vishram Ghat attracts pilgrims from all over the nation who come to bathe in its sacred waters and complete the customary Parikrama that begins and concludes here.

Evening prayers and Aarti at Vishram Ghat create a stunning spectacle. On paan leaves, devotees float Diyas and oil lamps into the nearby Yamuna River. Along with taking the holy bath, devotees also perform various Pooja and rituals on this ghat. Taking a boat ride to experience the tranquility of the soul-soothing Yamuna River is one of the top things to do on Vishram Ghat.

One of the holiest temples in Mathura, the Dwarkadhish Temple, is well-known throughout the nation for its exquisite architecture and murals. The temple is relatively recent, having been constructed in 1814, however, it is highly regarded. It features intricate murals surrounding the black marble statue of Lord Krishna as Dwarkadhish.

The structure is made to appear even more grandiose by a variety of stunning ceiling murals that depict various phases of the Lord's life and the exquisite Rajasthani architectural designs and craftsmanship.

The Vaishnava sect, which Mahaprabhu Vallabhacharya founded, manages the Dwarkadhish temple, which is a hub for many intriguing events all year long. The temple and its surroundings are a hub of a lot of interesting activities. It is located inside the boundary of the city's holy gate, close to the ghats of the River Yamuna.

Besides these popular temples and places, you can also visit other sightseeing places in Mathura Vrindavan such as Shri Radha Vallabh Mandir, Rangji Temple, Radha Kund, Gita Mandir, and Government Museum.

If you explore a few places near Mathura Vrindavan and have some time at hand then you may include nearby tourist spots in your Mathura Vrindavan Darshan Package tour. You can visit Govardhan Hill (23 km), Kusum Sarovar (19 km), Barsana (50 km), Fatehpur Sikri (64 km), Aligarh (65 km), and Agra (85 km).